After my last half marathon I took it easy for a while, but kept the run streak going whilst I was travelling around Cyprus. When I got back to the UK, that runstreak was in danger of ending due to the change in rules, but I decided to do laps of the grass. It was boring, it was repetitive, and I couldn't do more than a few miles at a time. It was however the only way I could keep on running. It wasn't the preparation I'd hoped for, but it's all I could do. Due to a seasonal postal delay with my PCR, I had doubts I would get to race this weekend, but fortunately it worked out okay in the end. Even the weather looked pretty promising, and my hope was that I'd get to see some running friends for the last time in 2021. There's a lot of people I've not seen since 2019, and even friends I live close-by to I've not seen since May this year, and before that it would have been early in 2020. So racing at the minute is just as much about getting to see people I know as much as it is about getting used to racing again.

I've not had a single race go to plan since February 2020, and even then the goal of that race had been position and not time - my times have been suffering since May 2019. For the last two years I've not been able to complete a single race without walking, even if it was only 5K. I think it's a combination of pacing of motivation - I'm trying to race as if the last two years haven't happened, and as soon as there's the slightest hint of difficulty, I just walk. I didn't really go into this race with a plan, I was just happy that I'd get to see people I know before the race. One of them I last saw at this race in 2019, and since then every race I would have encountered them at since, has been cancelled or other circumstances have prevented a meet-up. It was very good to see them again.

The weather was perfect. It was cool, and dry, and the wind was almost non-existent. I paced the race village to stay warm, the mud squelching as I went. I didn't really want to get filthy before the race had even started, but had already accepted it was going to be a muddy race. I was glad it was my regular running shoes getting caked with mud rather than my racing shoes that have holes underfoot to improve airflow. When the time came I made my way into the pen, and to the start line. The race had begun.

One day I'll start at a pace other than 05:00/mi, but I caught it quickly and reigned it back to around a 06:30/mi average, and let that slow for any inclines. I always forget there's a bit of a hill to go up in that first mile, but the legs are fresh at that point, and it doesn't really make a difference. I was slower than PB pace already, but I'd had no plan for that, and had started to think that a sub-87 would be nice. It would be a way to know I'm heading in the right direction again. It felt okay to start with, holding that pace, but I was cautious about the sections where the path turns to brick. I couldn't decide if they were actually slippery sections, or if it was in my head from expecting them to be since they were wet. Whatever the case was, every time I came across one, my gait changed, and it was as if I was prepared to stop a slide at any moment. Fortunately there weren't too many sections of this, and none of them lasted that long.

This first 5K passed by quickly, though I was already feeling tired, but couldn't understand why. It's not like it was even a fast 5K, or that I'd done much running since the 16 mile run last week. In years past, I've often walked briefly after the hill up onto the redway at the side of Great Linford Manor Park. This year, at least I hadn't needed to do that. Somewhere around there I heard someone playing 'Sleigh Ride' by The Ronettes, and for the next few miles this would be stuck in my head like an ear worm. I suppose it was a distraction, to take my mind off the fact that this race was already feeling harder than it should have and I was not yet half way. As I approached teh 6 mile marker I started to walk, but then saw the water station and decided that maybe some water would help, and started running again after just a few seconds. However, I should probably have walked for the water station as I managed to get a nose full of water instead of a mouth full. No, it's not a drinking problem (yes, that's an Airplane reference). I choked on it a little, and one of the marshals asked if I was okay just as I started to run again. I thanked them as I passed, and hoped that maybe I'd run the rest now, whilst knowing that was also very unlikely.

For the next three miles I walked more and more to the point where it felt I was walking more than I was running - I just couldn't get going again. Looking back over the GPS recording for this, I can see that I'd walked nine times between mile 6 and 9, and then a further ten times during the remainder of the race. Every time I walked I looked at my watch, and checked the predicted mile time. There came a point where it went from hoping for a sub-87, to thinking sub-90 absolutely needs to happen. As I rounded the hairpin bend after mile 9 up onto H7 Chaffron Way, I decided that after having done so badly already, that maybe just finishing should be my goal. I didn't want to give up on sub-90 though, that was one goal I'd worked for years to achieve, and it would feel like a defeat for it to be slower than that.

I knew the next four miles would be a mixed bag. I remembered that the underpasses could be hard work at times, and I remembered there'd be a climb alongside a field, but also remembered there's a downhill section where I could claw back some time. I wasn't yet ready to give up. Sadly there were none of Milton Keynes' cool little delivery robots whizzing around this section like there often is, but there were plenty of discarded scooters. One of them was difficult to see in the dark of an underpass, but a runner in front of me made sure people behind him had seen it. Despite not wanting to give up, this tenth mile was also my slowest at 07:40/mi: even slower than marathon pace. That's the thing about running though, there's always literal ups and downs, and sure enough the next mile included the downhill bit.

At the point when the 1:30 pacer caught up with me I realised what a mess I'd made, but as long as I could finish several seconds ahead of him, then it wouldn't be a complete loss, and that kept me going as I reached Newlands, and from there overtook and ran towards the finish. I finished 92nd out of 1,471 runners with a time of 1:28:53. Maybe not what I'd hoped, but somehow, despite all of the time I'd spent walking, it wasn't a complete failure. Somehow it had been another sub-89, slower than Leicester Half, but it'd do. The highlight for the day, in fact the whole week, was just getting to see people again. 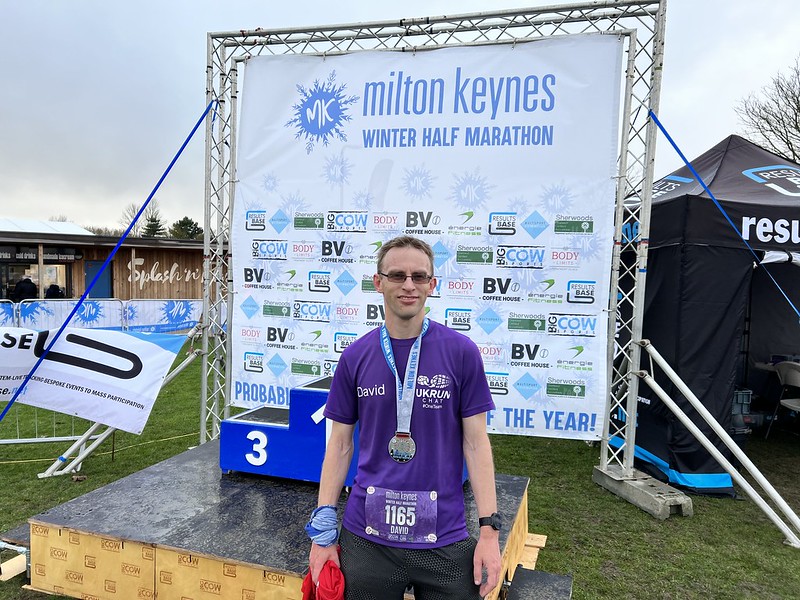 For now, racing is at an end until 2022 brings with it more races, and chances to see friends once more.