I last did this race in the March of 2020. I went into it knowing it could be my last race for a while as we were on the verge of lockdown and many later events had already been cancelled. It'd been a tough day, and I wasn't really that sure how to pace it. I'd decided with no marathon I may as well go faster, but then I wasn't sure how fast I could realistically push it without my legs giving up and ruining the remainder of the race. It'd been a wet day as well, I could remember just how wet that last lap had been, and how miserable the race felt.

Fast-forward two years and we no longer have any COVID restrictions, I'm a bit slower now, and once again I'm training for a marathon. This time I'd be going into the race with a plan to keep it easy, and the hope that this one last long run will be enough for the Manchester Marathon (if I can still do it - for reasons I will not go into). With Manchester I really want to PB, even if it's only by a minuscule amount - as my marathon times have been getting steadily worse since my last PB in 2018. For Milton Keynes, just finishing will suffice as it will be more time on legs, more practice at getting to 20 miles unscathed.

Milton Keynes is about half-way between Leicester and London, so not as far as some races I've done recently, or races I've got planned in the near future. I've raced there enough now to know a few places where there's free parking, in walking distance from Xscape, where the start of this race is located. It's actually just under a mile so the perfecr warm-up and cool-down distance to take me to around 22 miles for the day. Exactly where I wanted to be. Rain had been forecast for the day, and I'd woken to the sound of rain beating against my window. By the time I got to Milton Keynes it'd stopped, and the temperature was already in double figures. It could turn out to be pleasant conditions.

After a mile warmup, it was still cold standing around waiting for the start. I got to chat to @frankie_runs before the race, who I'd not seen for a few years. He was there doing the 20 miler too as prep for an ultra. When the race started I remembered pretty quickly that there was a fair bit downhill to start with. After having done two miles at around 6:45/mi I caught myself, and slowed down a little. I figured the right pace for me to be aiming for right now would be 07:00/mi. It was around what I'd done in 2020, and doing that would help a lot with confidence for Manchester Marathon. After a yellow car forced it's way past the runners, I was starting to remember parts of the course from last time, and I remembered the torrential rain, but this time it was actually quite warm whenever out of the wind. The wind blowing across Willen Lake was particularly strong, but it wasn't really bothering me that much - I've had to deal with it on quite a few training runs already.

From around mile 5 I'd fallen in behind a couple of runners and stayed with them for the majority of the lap. At some point the 2hr20 pacer caught up, even though I was ahead of target at this point. I stuck with them for about a mile, but decided it wouldn't be a good idea to stick with them. By the time I reached the start of the next lap (about mile 10), I left them slowly drift ahead. I wasn't 100% sure what I'd do about fuelling - I'd got jelly babies with me to have one every mile from mile 8 onwards as I often do. This time however, I don't know how it happened, but the bag containing them was split along 80% of one side. When I'd reached to get them at mile 8 I'd lost all but 5. I'd had one then, again at mile 9, but then after that I decided I needed to ration them. I had the next at mile 11, and had planned to have another at mile 13. My stomach however was not feeling too settled. Two weeks ago I'd done a 22 mile training run, and had found chilli the night before had the same effect as this time. I decided it was perhaps for the best if I didn't bother with the remaining jelly babies after all.

The next mile and a half were uncomfortable, and just before I reached mile 15 marker I started to walk. My hope was that less movement would settle it. When I've had this on training runs I've never been able to make up my mind whether slowing down, or speeding up is the better choice. Speeding up means getting it done quicker, but slowing down has a more immediate result - it just means it's going to take longer. A runner I'd been behind for some time, and had overtaken at some point, caught up and encouraged me to get running again. I did, and he then added that we'd be past the headwind shortly. If only the headwind had been the problem! I kept on going, running with him for the majority of the next couple of miles until out of the wind.

It was eventually too uncomfortable to keep running so I walked a bit, and once it'd eased enough I got going again. It was somewhere along the small section that's covered three times that I passed @frankie_runs and got to check-in on how he was before continuing on. At mile 18 the course leaves the lake behind and veers off to the left to begin a two mile ascent to the finish. I'd completely forgotten about this part of the course, and my legs now needed the rest anyway so I was taking walking breaks along parts of the climb. The worst bit was the hill in Campbell Park - I must have blocked that out of my head after the last one. It's not a good hill to be climbing when you've already run 19 miles. The worst of it is short and sharp, but I really didn't want to try it, so I just walked to the top, and then started running from there again.

The finishing straight has a bit of a chicane where it goes from the pavement to the road, but as soon as my feet hit the road I knew I may as well sprint to the finish. The sooner I was done, the sooner I could sort my stomach out. I sprinted down that last bit, hitting 5:05/mi pace, and quickly got a bottle of water and the medal so I could go elsewhere in the race village. I'd finished 62nd out of 374 finishers for the 20 miler, in a time of 2:25:27. It was about 5 minutes slower than 2020. Not ideal, but it could certainly be worse. I knew my fuelling for the marathon, if I get to do it, would go better as I'd be using what has been tried and tested many times before. Despite the time, it actually felt promising that I'd be ready. 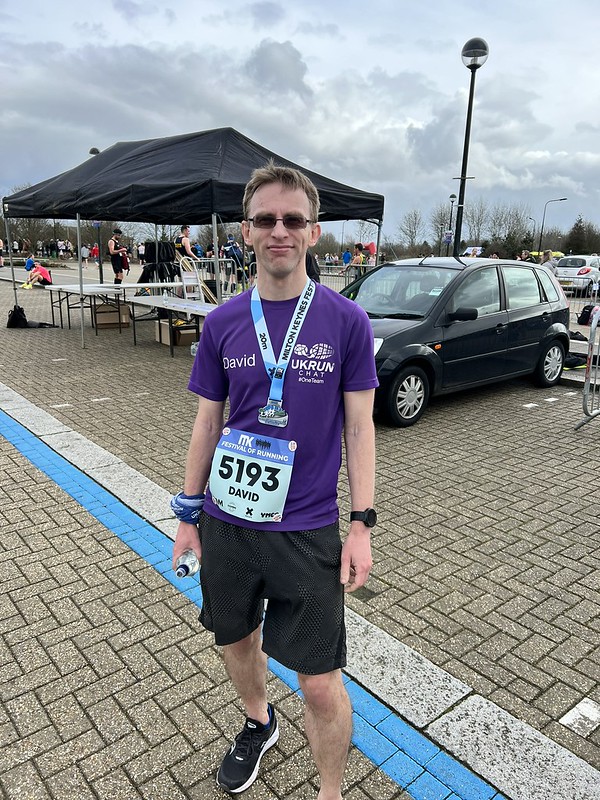