Repeating races I've done before always feels like a way to benchmark where I currently am. It's been a long time since I first did this race, and have done it a few times over the years. It was one of my first races back after the start of the pandemic, when they started up again. For that race I did it in 39:20 - not my fastest 10K, but the fastest I'd done this course. So for this race my goal was to try and beat that, if I could it would certainly be nice to get a PB but I knew that'd be unlikely. I made a note to try and keep my pace between 6:13 and 6:18/mi.

This was a late start to the day, as although 'elites' would be at 09:00, I live close enough to not have to leave home until 08:00 and still have plenty of time to use the facilities, warm-up, and have a wander. I noticed pretty quickly that Gemma Steel was running this one, so made the assumption she'd be winning this one. The race started promptly, and I certainly started way too fast and reigned in my speed after a few hundred metres. After about a mile, I realised the base layer was a mistake as it was warming up quickly. This first mile was covered in 5:55/mi and I felt confident still, I thought maybe if I slowed down now to 6:15/mi everything would be okay and I'd get the result I wanted.

I did think this first time outside the park was harder than I remember it being last year, but I kept going and the gentle incline around the outside soon passed as the route went back inside the park via the carkpark. Around this point I felt I really needed some water, and couldn't remember where the water stations usually are. As I passed two miles I was still on target, and I thought maybe the water must be around the 5K mark which it was, and I walked briefly to open the bottle and drink some. When I got there, but first I had to leave the park again to run along the canal, and then came back in through one of the road entrances, passing the start again and then running around to the aforementioned water station.

After this I ran along the River Soar, and around this time I could see some oncoming cyclists ahead of me so kept to one side, the marshal keeping her eye on them as well, but at the last possible second she stepped out of the way of a sign pointing to the right, so I had to stop and quickly and go that way instead. Not too bad, but I should have remembered the turn from last time. If I hadn't have been in a bit of a large gap between groups of people it might not have been so bad. Once I was through the gate and to the large open area I could see other runners again, and kept them in sight. I walked a few times now, feeling tired, but eventually I was back on the other side of the river, and on the way out of the park. This time, I kept looking out for where the left turn would be. I was sure in some previous years it's gone down the side of the courts, but this time it didn't. A runner had overtaken me along this bit, and when we reached the entrance to the car park I thought we'd turn left and then go across it to the canal - but the marshal seemed to be waving us to carry on instead. As we got close to her, we then realised she was signalling to a car instead, so we had to both turn back and go the way we were meant to.

After the steps onto the canal path I walked again a few more times - there was less then 2 kilometres to go, but I'd had enough. The route then goes back onto the main road and in through the gates to pass the start for the last time. I tried to keep going but then eventually I got to a point just after 6 miles where I could turn either left or right. There were no runners I could see, so I stopped moving completely to look which one was more likely. A spectator point to the right, so I went that way and sure enough saw the finish, so sprinted to the end.

I finished this one in 40:43, in position 32 out of 554. It was such a bad result for me that not only was it slower than last time I did this race, but it was also slower than my slow nighttime race at Battersea. There's not really any positives I can take from this one, other than it was nice to run in the sun, and it was at least another race done. The lesson to be learned here is to be careful with my starting pace otherwise I'll pay for it with interest. 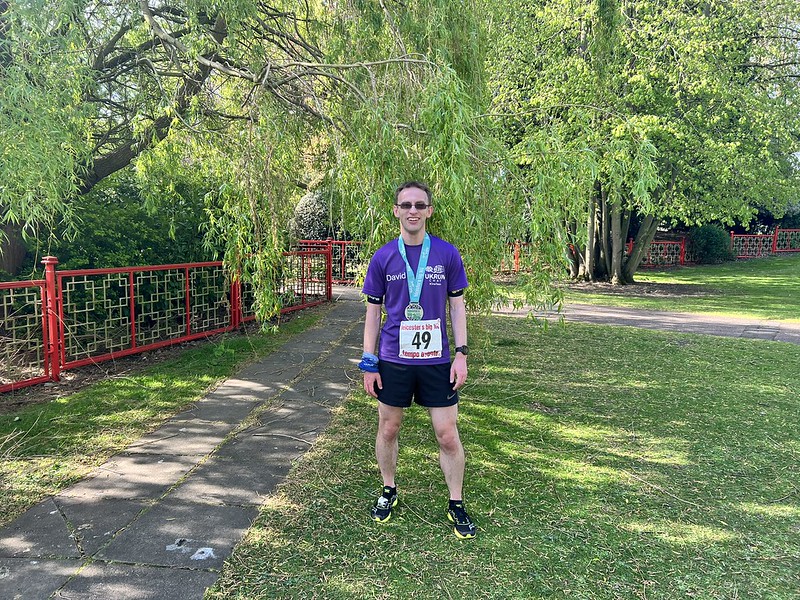